In 1884, novelist and famed newspaper correspondent George Alfred Townsend, better known by his pen name, "Gath," began purchasing lots in Crampton's Gap from various local landholders, amassing a sizable estate which he coined "Gapland." Gath first came to the Middletown Valley as he was writing the novel Katy of Catoctin, a sequel to The Entailed Hat. Between 1885 and the turn of the 20th century, Gath designed and constructed over a dozen buildings comprising the Gapland Estate. There were houses which he named the Hall and Askelon, his rambling Den and Library, the Lodge where the family gathered for meals, a barn, carriage house, and guest houses. Gath also built a mausoleum which was never used. By the time of his death in 1914, Gath had spent most of his wealth building Gapland, and the estate was left indebted and abandoned. After several attempts by various private individuals and organizations to recover the estate, Gapland was purchased by the State of Maryland in 1949 and redeveloped as a park. The most enduring legacy of Gath's estate is his monument to fellow correspondents from the Civil War, known as the War Correspondent's Memorial Arch, which he built in 1896. 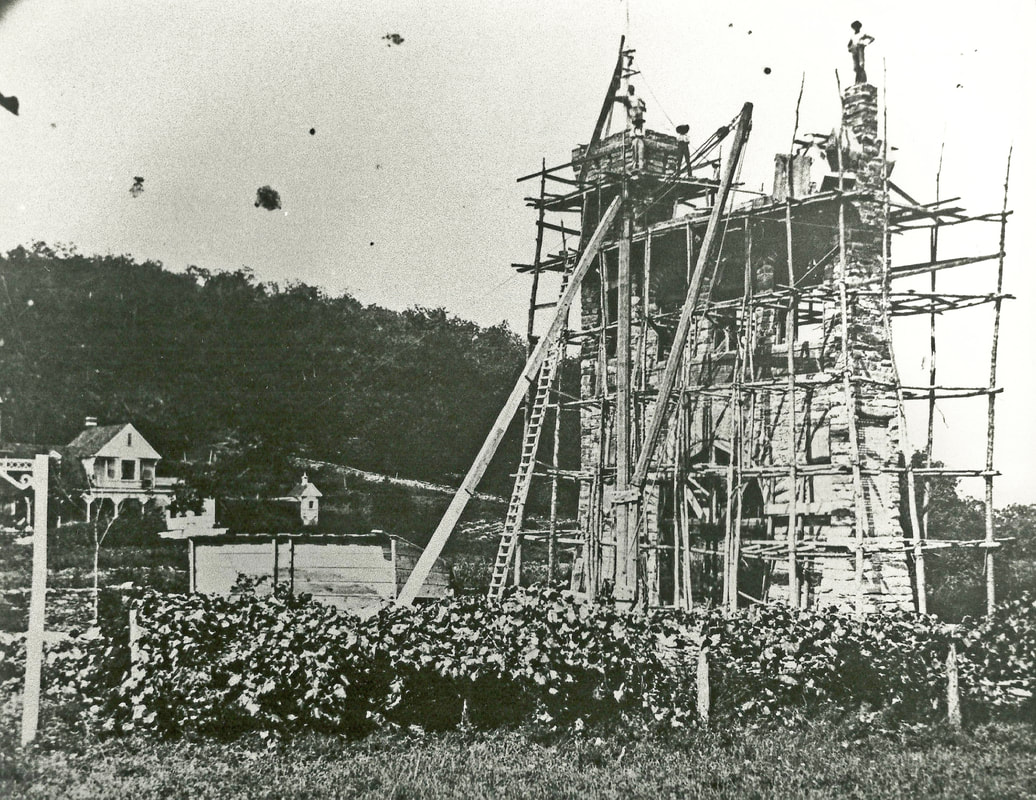 Construction nears completion on the War Correspondents Memorial Arch in 1896. Gath canvased his wide network across the country, including President McKinley, Andrew Carnegie, and Mark Twain, to raise funds for completing the arch. Visible on the left side of the photograph is Askelon, the first house completed by Gath on the estate. Photograph donated by Bill van Gilder. 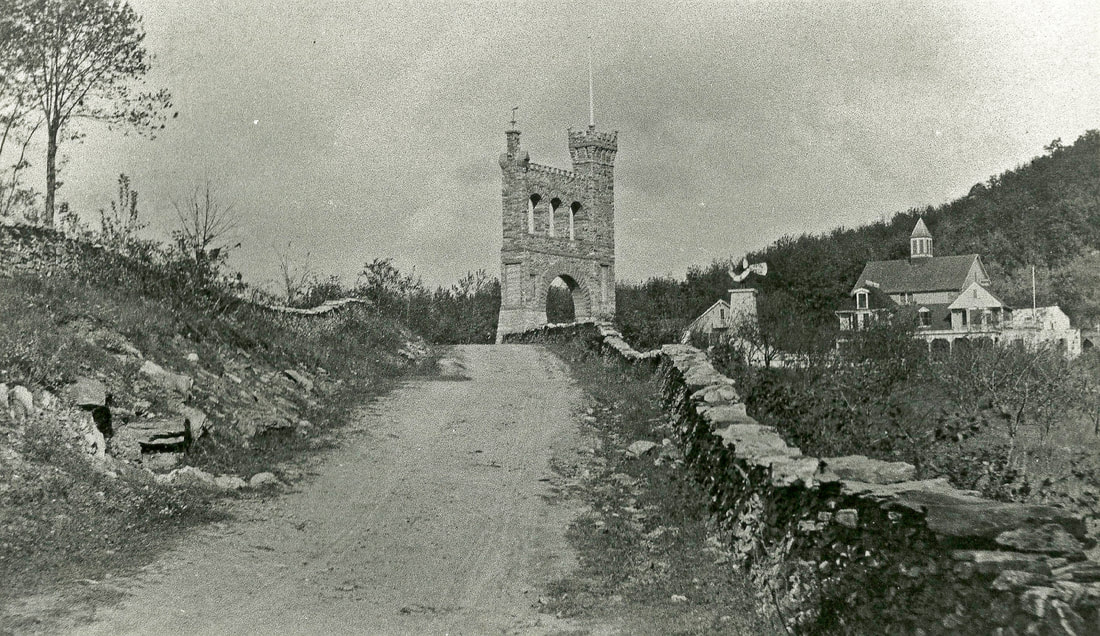 Visitors to Gapland approaching the estate from Burkittsville would be treated to this view of the arch as the road turns to complete its ascent of the mountain. The stone walls on either side of the road have been preserved today through the land is now largely forested around the arch. To the right of the monument are the carriage house, barn, and Askelon House. ​Photograph donated by Bill van Gilder. 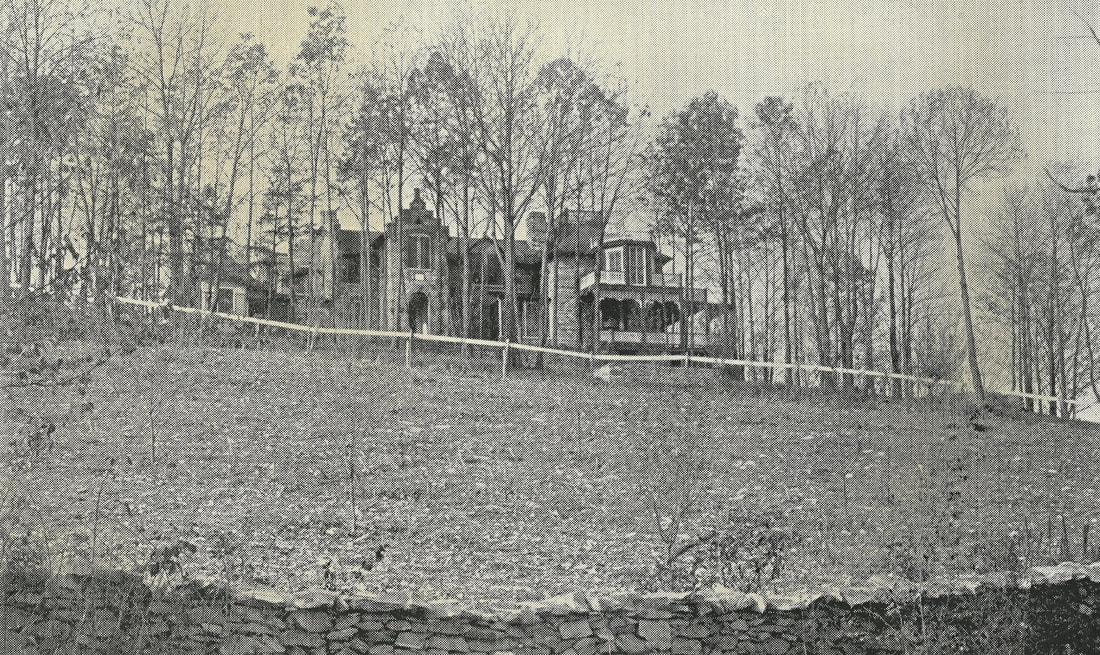 Another view from the road ascending to Crampton's Gap from Burkittsville, the structure seen in this photograph is Gapland Hall, the primary residence on the estate for Gath and his wife, Elizabeth Evans "Bess" Rhodes Townsend.
​Photograph donated by Merle and Becky Guyton.

This detailed view of Gapland Hall demonstrates how Gath continually rebuilt and changed elements of his estate. Between the time of the preceding photograph and this one, the porches on the front of the hall were extended outward while the open pavilion was removed. Photograph donated by Jody Brumage. 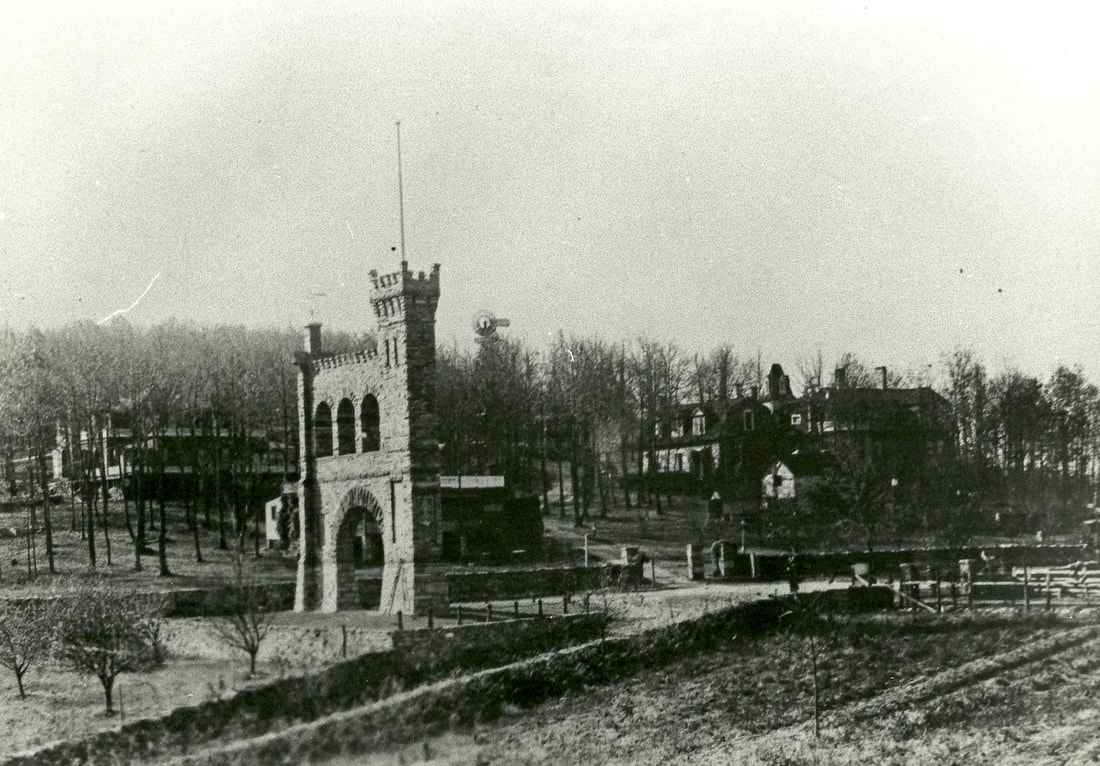 This sweeping view of Gapland taken from the north looking south shows the meeting of Gapland and Arnoldstown Roads in front of the arch. On the ridge beyond, Gapland Hall (left), the Lodge (center behind the arch), and the Den and Library (right) are visible. Gath's gardens are also visible in the lower right corner of the photograph. ​Photograph donated by Bill van Gilder. 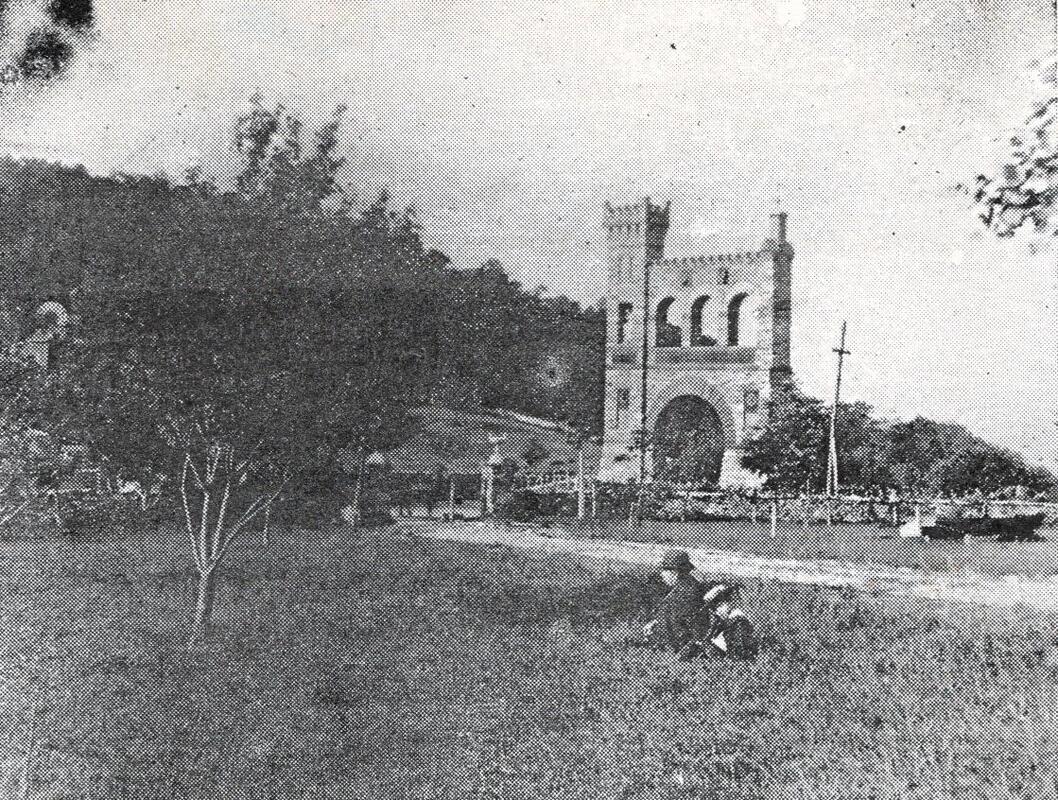 Even before Gath's death in 1914, visitors from far and wide were drawn to the mountaintop for the views and to see Gath's eclectic creation. Through the 1910s, while the estate stood in limbo before it was sold by the Townsends, Gapland remained a popular stopping point where folks gathered for picnics and reunions. This postcard, dating approximately to 1915, shows two visitors enjoying the shade of the lawn in view of the War Correspondents Memorial Arch. Much of Gapland's landscape, its stone fences and plantings, were still intact. By the late-1920s and especially in the 1930s, the condition of the estate rapidly declined as lack of maintenance and pilfering of the stone and other building materials led to the disappearance of many of the estate's structures. Photograph from the Charles Graham Arnold Collection.

In 1916, Rev. Harry C. Erdman, pastor of St. Paul's Lutheran Church, initiated a series of summer vespers services held on Sunday evenings at Gapland. In time, the services grew to be very popular, attended by hundreds of people and led by the pastors of many of the churches around the Burkittsville area. This scene was captured in 1926 of people gathered on the estate for a service. The building seen in the background is the Lodge and the top of the arch can be seen beyond. Photograph from the Brethren Church Historical Society​. 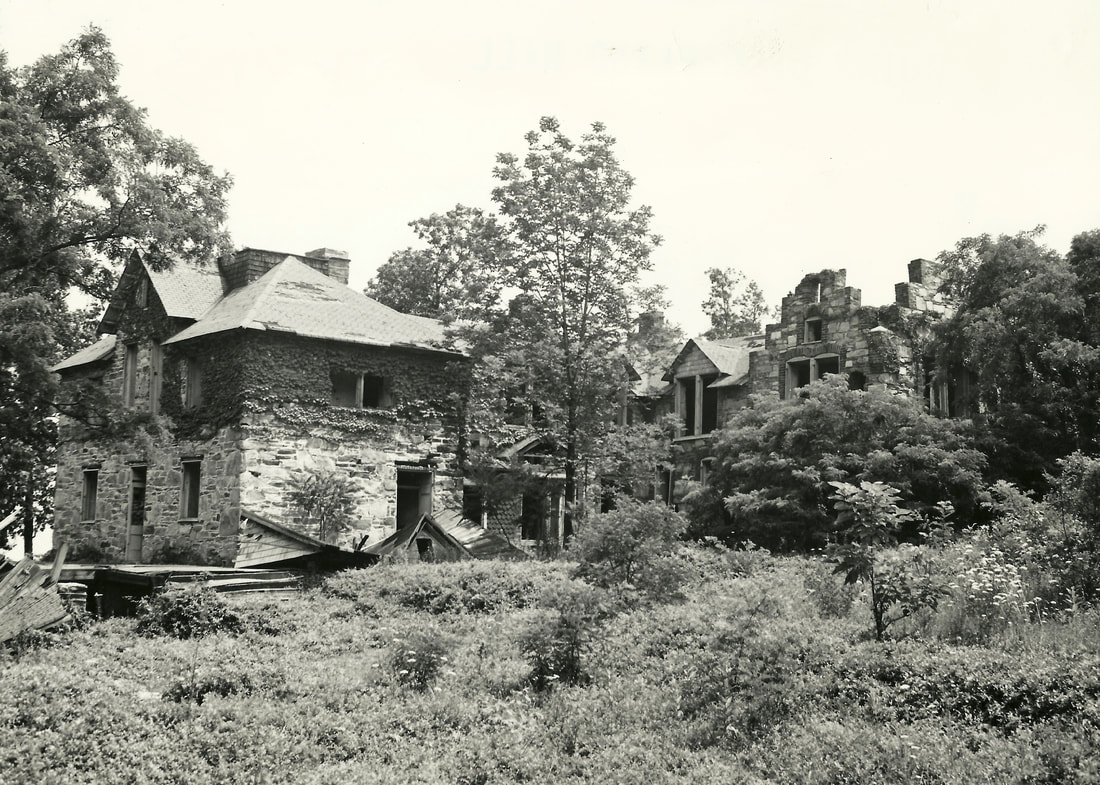 Gapland quickly deteriorated after Gath left the estate in 1911 to live with his daughter in New York. The picturesque ruins of Gapland Hall attracted area teenagers who wandered the site as well as pilferers who removed brick, stone, terracotta, marble, and other valuable materials from the buildings. This view of Gapland Hall was taken in the 1940s for a newspaper article that appeared in The Baltimore Sun lamenting the past glory of Gapland. Photograph donated by Jody Brumage​. 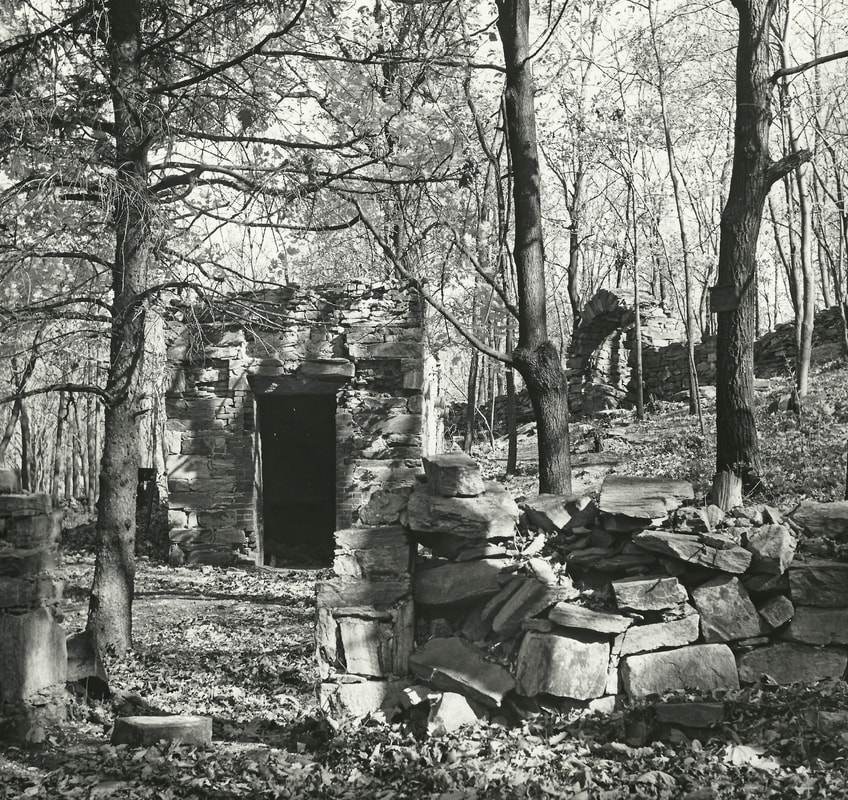 This later view of the mausoleum shows the abandoned structure with its decorative stones removed. Behind the mausoleum on the hill, the stone archway leads to the site intended to be a family burial ground. The mausoleum has since been restored. ​Photograph donated by Jody Brumage.