The communities which border Burkittsville to the south all share a common tie to a historic estate known as the "Merryland Tract." First surveyed in 1732 for Captain John Colville, Merryland extended from the Potomac River in the south to the Coatesville area in the north, bounded on the west by South Mountain and extended as far east as Petersville. Containing over 6,000 acres, the Merryland Tract was divided into 22 lots and sold beginning in the early-1770s, bringing many prominent families to the area and establishing the footprints of the modern-day communities of Petersville, Knoxville, Coatesville, and Brunswick.

Coatesville is the name of a scattered hamlet of houses which stretches along the base of South Mountain along Maryland Route 17. Much of the land on which Coatesville was built was made up of wood lots owned by the wealthy farmers who inhabited Merryland Tract lots around Petersville. Beginning before the American Civil War and increasing in the years after the war, families who had been enslaved on the Needwood Plantation and other farms were given lots from these timber tracts to establish their own homesteads. Coatesville is a historic settlement critical to understanding the legacy of slavery in the Burkittsville area.

Many of Coatesville's families were brought to the Burkittsville area in the late-18th century to work on the Needwood Plantation, owned by Maryland Governor Thomas Sim Lee. The governor's house, now known as "Old Needwood," dates from the late-18th century. After his second term as Governor of Maryland, Lee retired to Needwood in 1794 and remained here until his death in 1819. Needwood and its surrounding farms were primarily used to grow grain. Enslaved men and women worked in the fields in addition to serving in the household and many lived in cabins scattered across the extensive lands of Needwood. In the late-18th century, Governor Lee was the single largest slaveholder in Frederick County, holding as many as 200 African Americans in slavery. His will of 1819 lists 110 enslaved people by first name, they being divided among his children along with Needwood's land holdings. Photograph from the museum collection. 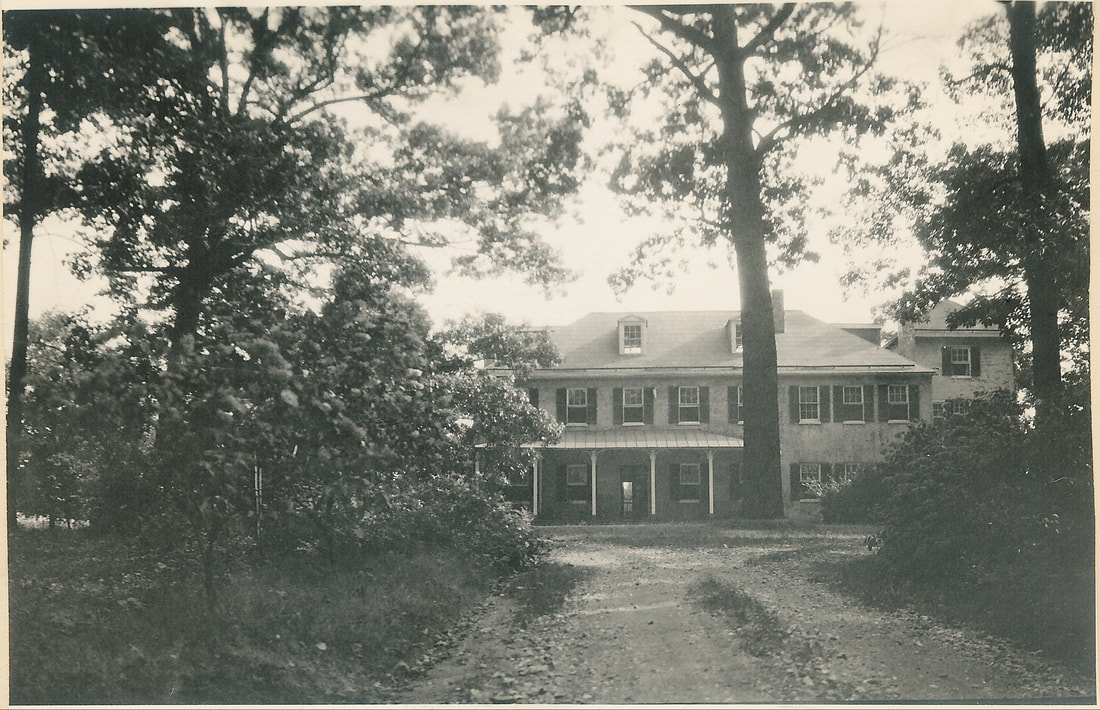 Another of the historic homes associated with the Needwood Estate is "Needwood Forest." A house stood on this site in the early-1770s when an Anglican priest and educator, the Rev. Bartholomew Booth settled and established a private school here. In the short time Rev. Booth's school existed, his students represented some of the most prominent families of the mid-Atlantic colonies, including children of Charles Lee, Hannah Washington (sister of George Washington), Benedict Arnold, and Robert Morris. Rev. Booth was suspected of being a loyalist when the Revolutionary War broke out and was pressured to flee Frederick County, removing to "Delamere," a farm along Antietam Creek near present-day Devil's Backbone Park west of Boonsboro. Photograph from the Horsey Collection, donated by Sarah Horsey​. 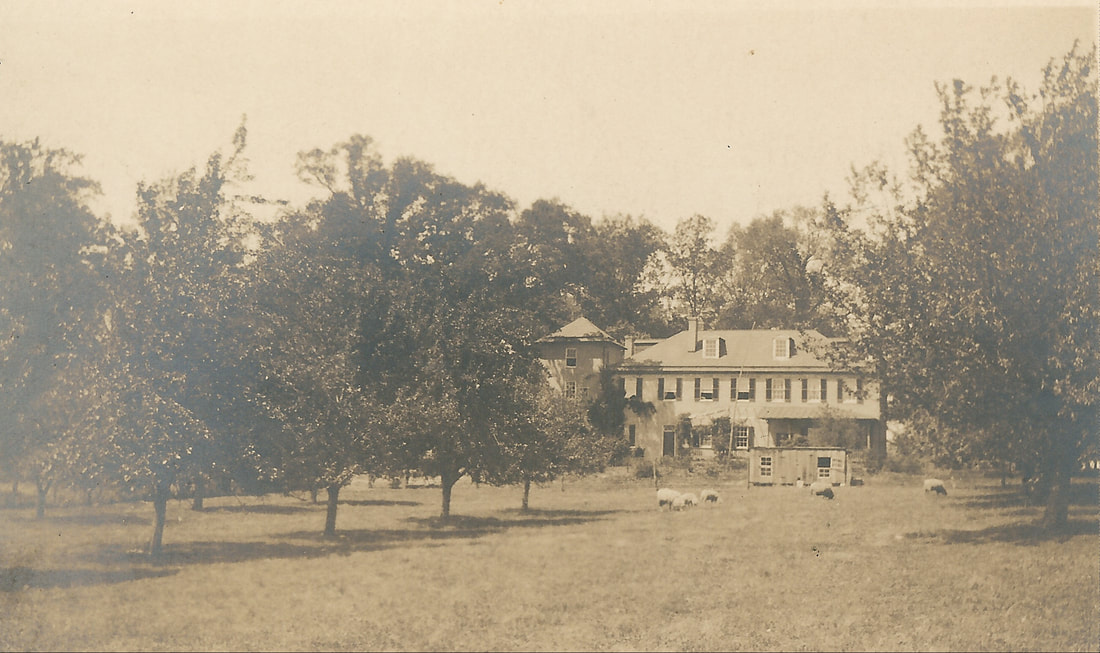 Sheep graze among the fruit trees lining the south lawn of Needwood Forest in this early-20th century view. Upon the death of Governor Lee, Needwood Forest was willed to his son, William Lee. During the American Civil War, William's daughter, Mary Digges Lee Gouverneur and her husband, Samuel, lived at Needwood Forest. Mary wrote a memoir in which she recalled hiding the family's horses in the cellar of Needwood Forest when the U.S. and Confederate Armies passed through the area.
​Photograph from the Horsey Collection, donated by Sarah Horsey.

After his early equipment was destroyed during the Civil War, Outerbridge Horsey spend several years in Great Britain studying whiskey distillation before returning to Needwood and building a new complex. This rendering from the turn of the 20th century shows the stills and warehouses at the height of the distillery's operation. ​Photograph from the museum collection.
Petersville is a historic community which lies at the center of the old Merryland Tract. Settled in the late-18th century as the tract was subdivided into lots, the expanses of rolling farmland and the predominantly-English settlers resulted in the development of a more "tidewater" culture in Petersville in contrast to the mostly German communities that surrounded it. With the construction of a turnpike connecting Frederick to Harpers Ferry in the early-19th century (today's Maryland Route 180), Petersville enjoyed growth as a commercial center halfway along the turnpike's journey across the Middletown Valley. The wealth of its early families, built on plantations and the use of slave labor, led to the creation of several elaborate homes which remain standing today. Petersville's historic churches also preserve the legacies of its African American community. 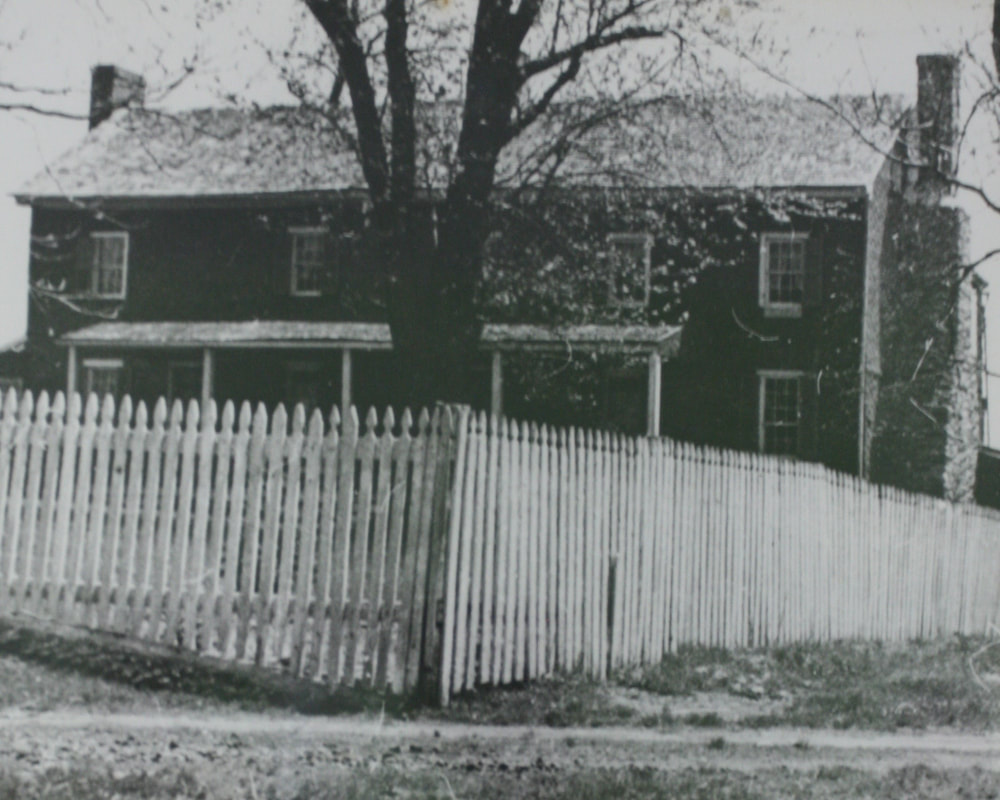 One of the oldest standing houses in Petersville is Barleywood, the home of the West Family built in the late-18th century. At two times in its history, Barleywood was the site of a school. From 1835 until 1841, Rev. Richard Phillips of St. Mark's Episcopal Church operated a female seminary at Barleywood. In the 1850s, Rev. George Lewis Staley, formerly the pastor of Burkittsville Resurrection Reformed Church, established "Linwood Academy," a school for boys. While this school was shortlived, he later established a female seminary at Barleywood which later transitioned to St. John's Female Seminary at nearby Tryconnel. Photograph donated by Thomas Claggett.​ 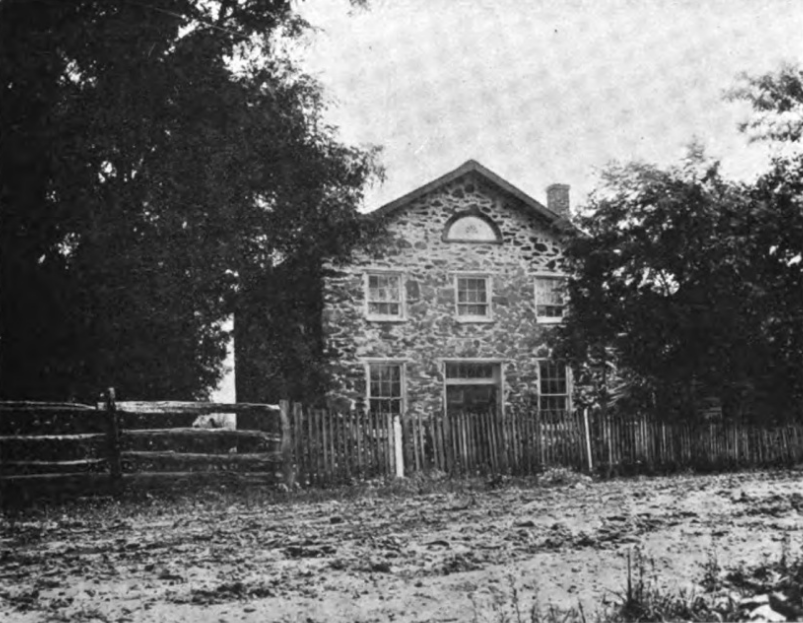 This stone building in the center of Petersville was built by Governor Francis Thomas to serve as a town hall, despite Petersville never being a formally incorporated town. The structure soon became a church, first used by a Methodist Episcopal congregation. In 1903, a Reformed congregation, founded under the auspices of Burkittsville's Resurrection Reformed Church was organized in Petersville. Faith Reformed Church purchased the former Methodist Episcopal Church and worshiped here until 1938 when the congregation disbanded. The structure has since served as a private residence.
​Photograph from the museum collection. 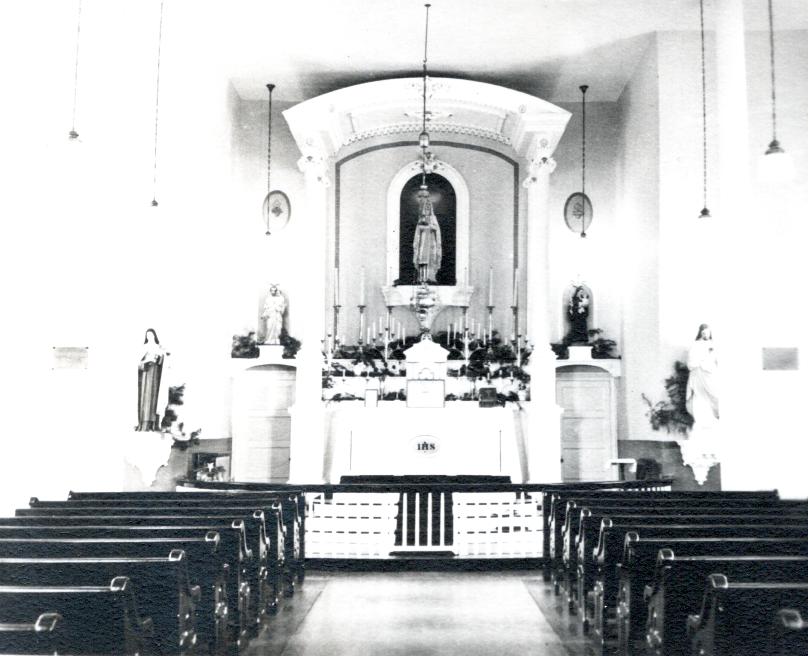 The interior of St. Mary's Church is depicted here, again for the 125th anniversary observance in 1951. The large canopy that covers the altar remains intact today. Photograph from the Charles Graham Arnold Collection​. 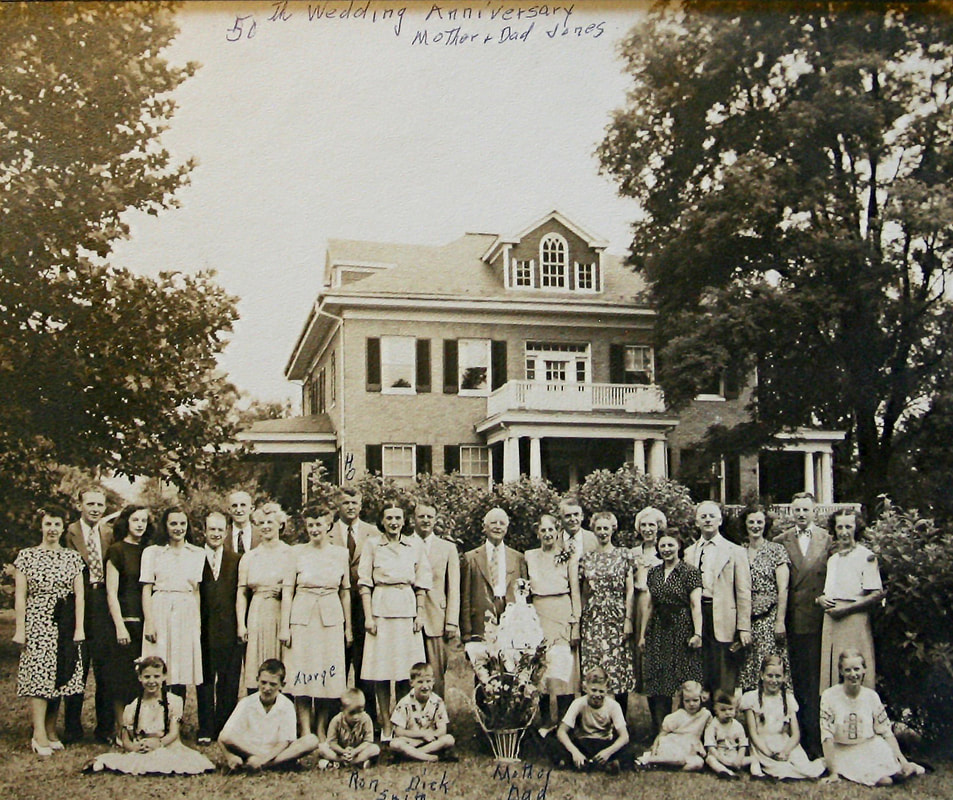 The Colonial Revival-styled Howard Marvin Jones house stands near Barleywood on lands formerly owned by the West and Claggett families. Constructed around 1920, the house was built by Howard Marvin Jones and his wife, Mabel. The Jones were prosperous business owners who operated a hotel and general store in nearby Brunswick. The house remained in the Jones Family for almost half a century. The current owners of the house have carried out thorough restorations of the property and placed the house on the Maryland Inventory of Historic Properties. This view of the house was taken in 1947 and shows a gathering of the family to celebrate Howard and Mabel's fiftieth wedding anniversary. Photograph donated by Joan Porter and Mike Wozny.​
Knoxville is situated at the point where the Potomac River exits the "Water Gap" where it passes through Elk Ridge (Maryland Heights) and South Mountain. Settled in the early-19th century, Knoxville was an early stop for the Baltimore and Ohio Railroad as well as the Chesapeake and Ohio Canal, becoming a local commercial hub and shipping point before the establishment and growth of Brunswick a few miles downriver. Many of the town's historic structures were built in the 1840s when the local economy was thriving from mills built along the Potomac River in nearby Weverton. After the B&O built their extensive yards and shifted operations to Berlin (which was renamed Brunswick in 1890), Knoxville quickly lost its economic base and as a result, maintains its mid-19th century fabric today without the Victorian-era embellishments that characterize many other towns in the region. 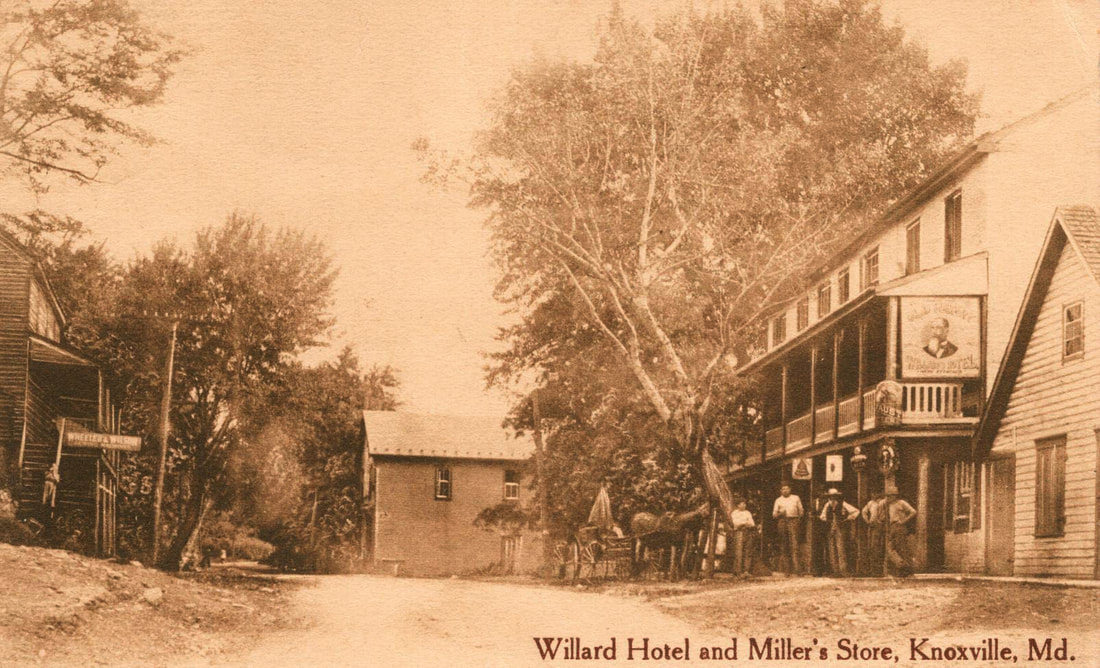 This postcard from the turn of the twentieth century shows the central commercial section of Knoxville. The large store and hotel on the right stood at the intersection between the Main Street (which was also the Harpers Ferry and Frederick Turnpike) and the road leading to Berlin, which would have only recently been renamed Brunswick a few years before the time of this photograph. The building in the center housed Knoxville's Post Office for many years. Photograph donated by Jody Brumage. 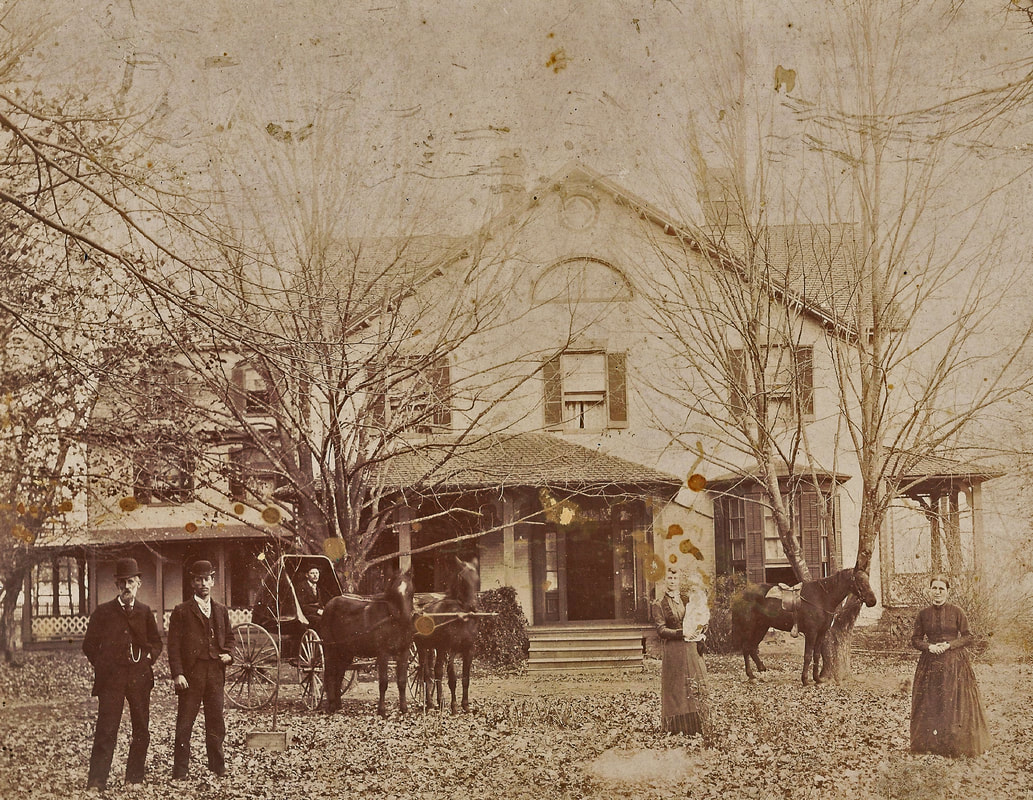 Tryconnell is a historic estate along Route 17 south of Burkittsville and north of Knoxville. The large farmhouse is actually a product of two eras of construction. The gabled section dates from the early-19th century and was built by the O'Donnell family. After the Civil War, the farm was purchased by the Rev. George Lewis Staley who had served as pastor of Burkittsville's Resurrection Reformed Church from 1846 until 1848. After purchasing Tryconnell, Rev. Staley relocated his boarding school for young women from Baltimore to Knoxville, establishing St. John's Female Seminary at the farm. As the school expanded, the need for additional classroom and dormitory facilities led to the construction of a three-story brick wing on the north side of the original farmhouse. This Second-Empire styled addition features a mansard roof with dormers which light the third floor of the addition. Photograph from the Hightman Collection. 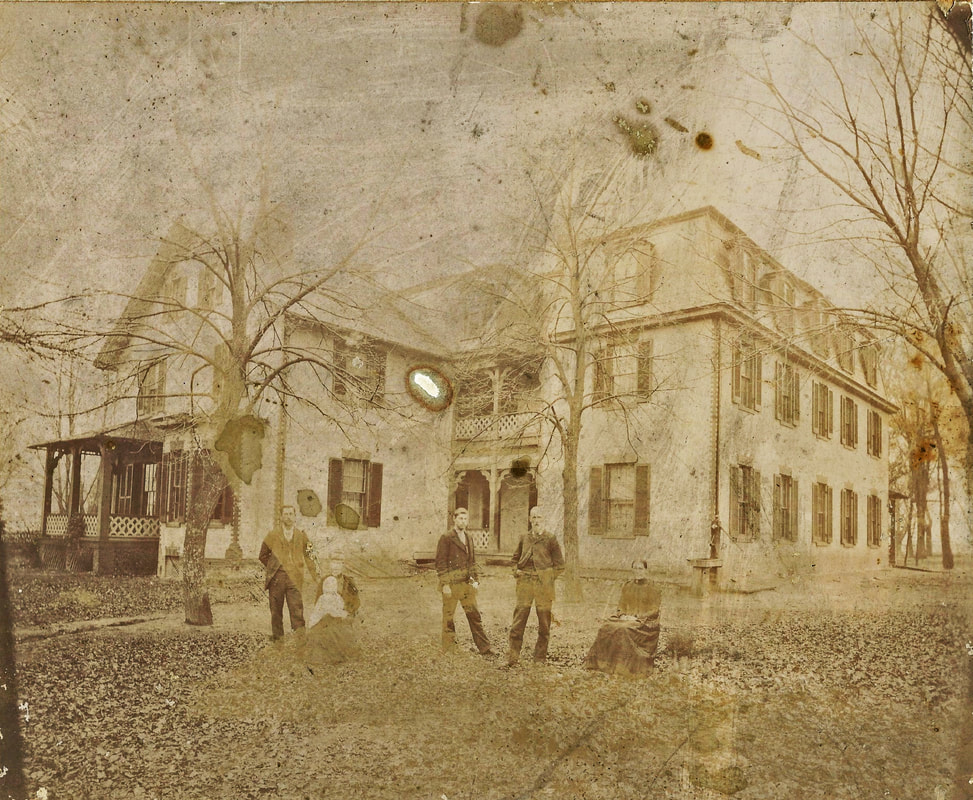 This view of Tryconnell clearly shows the two main portions of the house. The original  Federal-styled house is visible to the left and the three-story Second-Empire seminary wing is seen on the right. By the time this photograph was taken in the 1890s, Tryconnell was the home of the family of Thomas Hightman. Later Victorian-era alterations to the house included porches and bay windows. In the twentieth century, successive owners of Tryconnell expanded the farm to become one of the largest in Frederick County. When Col. and Mrs. Lewis Rock of Dayton Ohio purchased Tryconnell in 1951, the tract contained 711 acres of land extending from Knoxville up along South Mountain towards Coatesville, all land which was originally a part of the Merryland Tract. Photograph from the Hightman Collection. 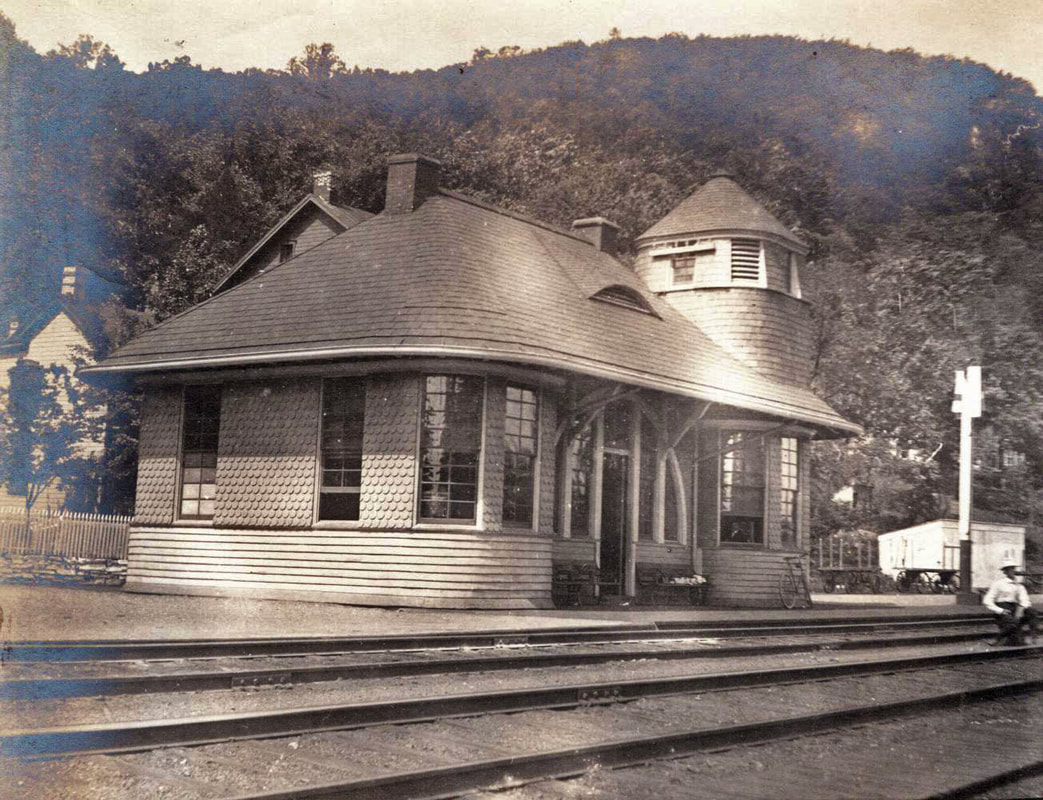 The town of Weverton was located less than a mile west of Knoxville along the Potomac River along the western base of South Mountain. Weverton was the venture of Caspar Wever who purchased significant tracts of land in southern Washington County as well as water rights on the Potomac River in the 1820s. His vision for Weverton was to create a great industrial town that would thrive from the water power provided by the river and benefit from the transportation arteries that came through it, namely the Chesapeake and Ohio Canal and the Baltimore and Ohio Railroad. Wever petitioned Congress in the 1840s to establish a national foundry at Weverton, noting the plenteous supply of wood for keeping a furnace burning and the water power as well as its proximity to the armory at nearby Harpers Ferry. Weverton suffered greatly in the economic turmoil of the 1840s and never fully developed to Wever's dream. The town remained a stop on the B&O, its depot seen here. Much of Weverton disappeared in the 1960s when US-340 was constructed on top of the original town site. Photograph donated by Jody Brumage​.