Historic structures, streetscapes, and other scenes from around the village.
The house and barn of "Friends Goodwill," also known as the Henry Burkitt Farm or the Guyton Farm. Photographs contributed by Rick and Denise (Guyton) Boyer. 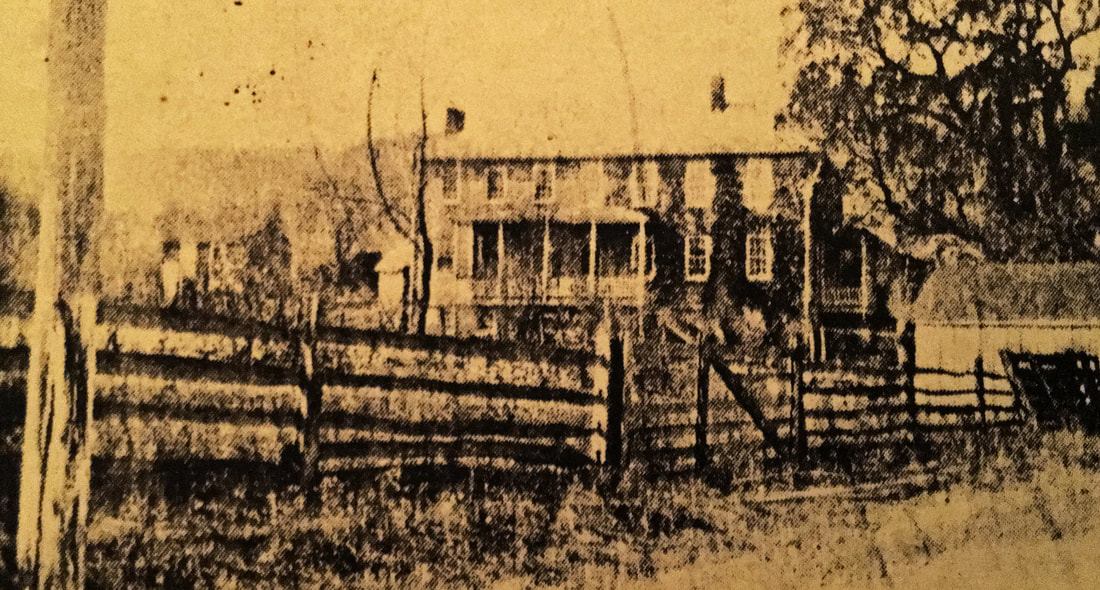 A historic view of the David Arnold House, also known as "Gaver's Recovery," the farm that anchors the west side of Burkittsville at the base of South Mountain. The farm occupies land from the original 1741 tract entitled "Dawson's Purchase," the first land tract patented within the present boundaries of the town. The earliest portion of the stone farm house was built in the late-18th century. David Arnold erected the large extension of the house, which is seen in this photograph. Photograph from an Arnold Family genealogical pamphlet, contributed by Paul J. Gilligan.​ 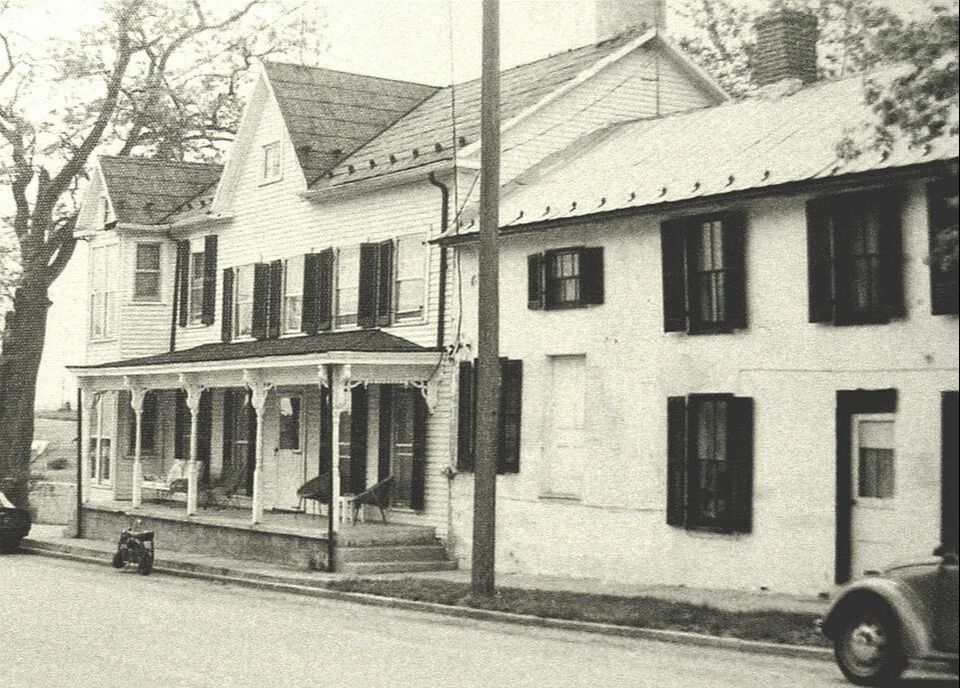 This photograph shows two historic buildings located near the center of town. The house on the left is the Dr. Tilghman Biser House, an early-19th century log structure later expanded and decorated in Queen Anne style. Dr. Biser was one of Burkittsville's first resident physicians. The building on the right is one of several buildings in town that was built to serve both as a residence and as a commercial enterprise. The door on the right would be the main entrance for the residence, while the door on the left, set above the street and originally reached by wooden steps, entered the storeroom. One of the business known to operate here was the tin shop of George Padget. From the museum collection​. 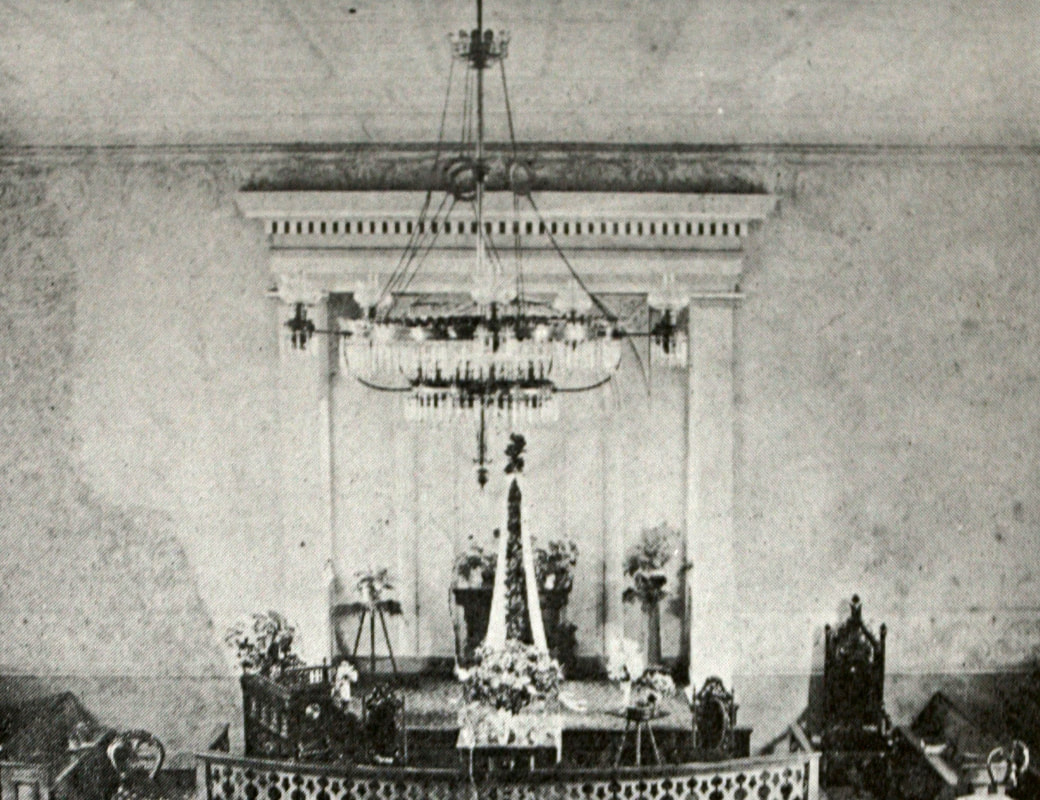 This late-19th century view of St. Paul's Lutheran Church captures the interior of the sanctuary prior to major renovations that were conducted in 1914/15. While many features of this interior no longer exist, such as the chandelier and the curved chancel rail, others do, including the cornice over the altar and some of the furnishings in the pulpit area. Photograph donated by St. Paul's Lutheran Church. 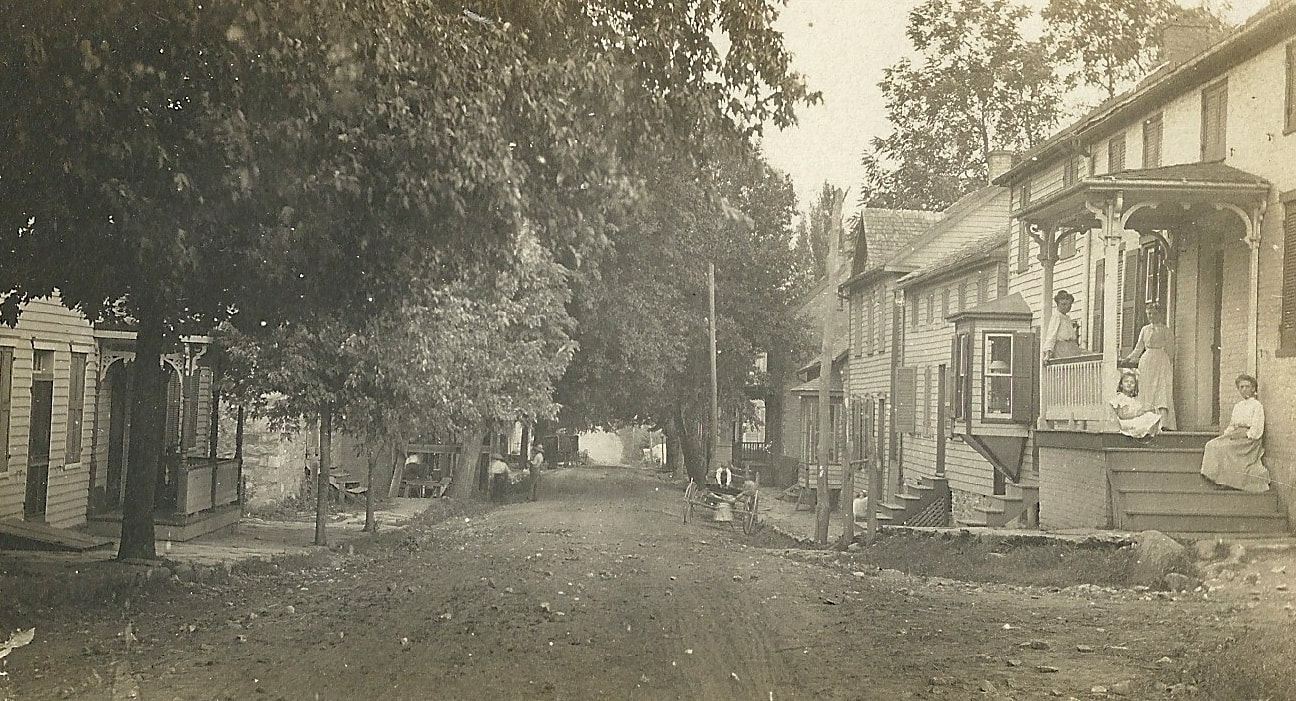 This circa-1910 photograph of East Main Street shows the dramatic tree-cover that once shaded Main Street throughout town. The first building on the right is the resident and cobblers shop of Casper Pfiefer. The stone building, barely visible as the second structure from the left, was known as the "Union Chapel," built in the mid-19th century as a Methodist Episcopal Church but later used as a meeting hall for town organizations, including the Junior Order of United American Mechanics (J.O.U.A.M.). The building was dismantled in the 1960s and is now the site of a parking lot. From the museum collection​. 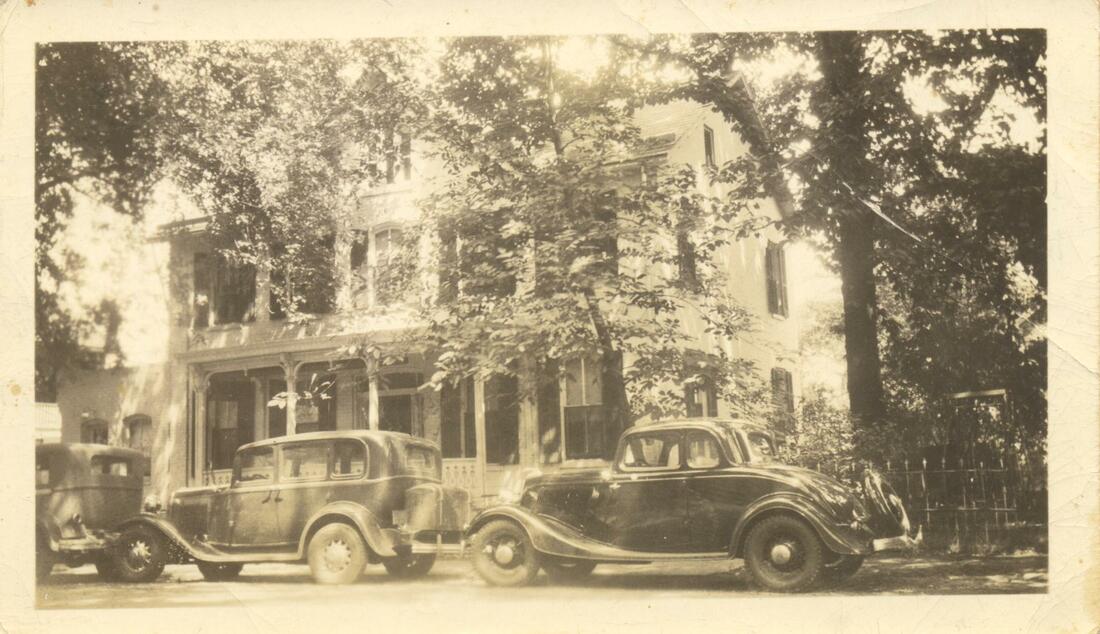 This elegant Italianate styled house at 3 West Main Street was the home of Dr. George Wilmer Yourtee in the early-20th century. Dr. Yourtee saw his patients in the small office seen in this photograph attached to the left side of the house. Photograph donated by Robert and Maurine Young.​ 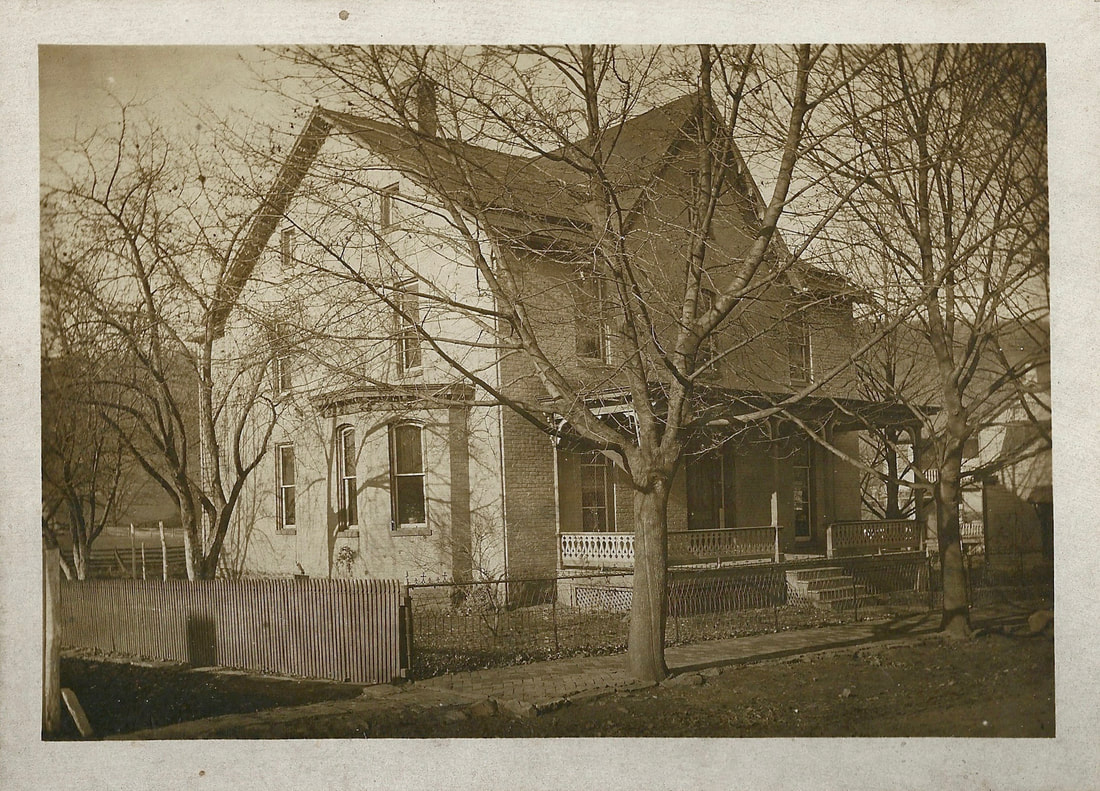 ​The Victorian character of the Graham House is indicative of the prosperous era enjoyed by Burkittsville in the last quarter of the 19th century. Local industry fueled by the two rye whiskey distilleries and the tannery operating around the village helped to rebuild the economy after the Civil War and led to the construction of many new buildings in the town sporting popular styles of the Victorian Age. When the Baltimore & Ohio Railroad opened their Washington County Branch line in the 1870s, Burkittsville gained access to the railroad at Gapland Station, two miles to the west over South Mountain. This connection allowed for easier and cheaper importation of mass produced architectural details such as decorative millwork or “gingerbread” and windows with larger and sometimes specially-shaped panes of glass, such as those seen in the Graham House. The Graham House, constructed in the mid-1880s, blends elements of Queen Anne, Gothic Revival, and Italianate architecture. 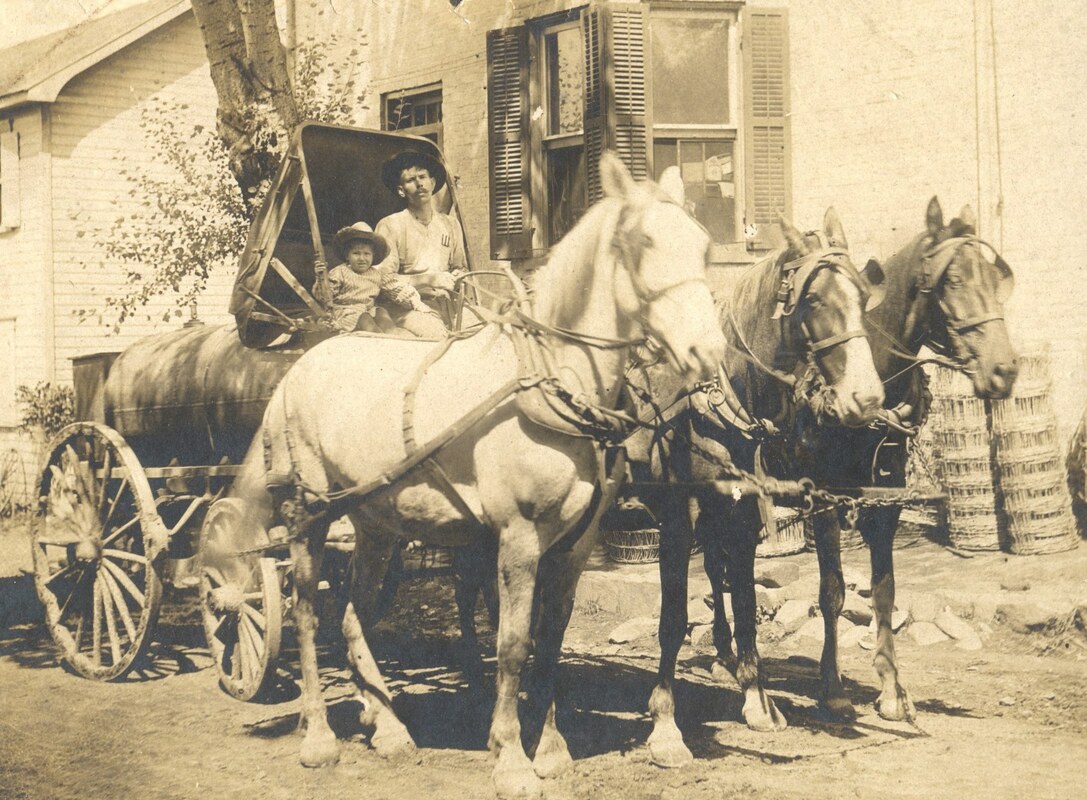 This wonderful scene captures John W. "Coal Oil Johnny" Mentzer and his son, Peter J. Mentzer, on their delivery wagon in Burkittsville. Coal Oil was a predecessor to Kerosene, used for illumination, and remained a term of choice even after petroleum-derived Kerosene became the main lighting fuel. Photograph donated by Susan Mentzer Blair. 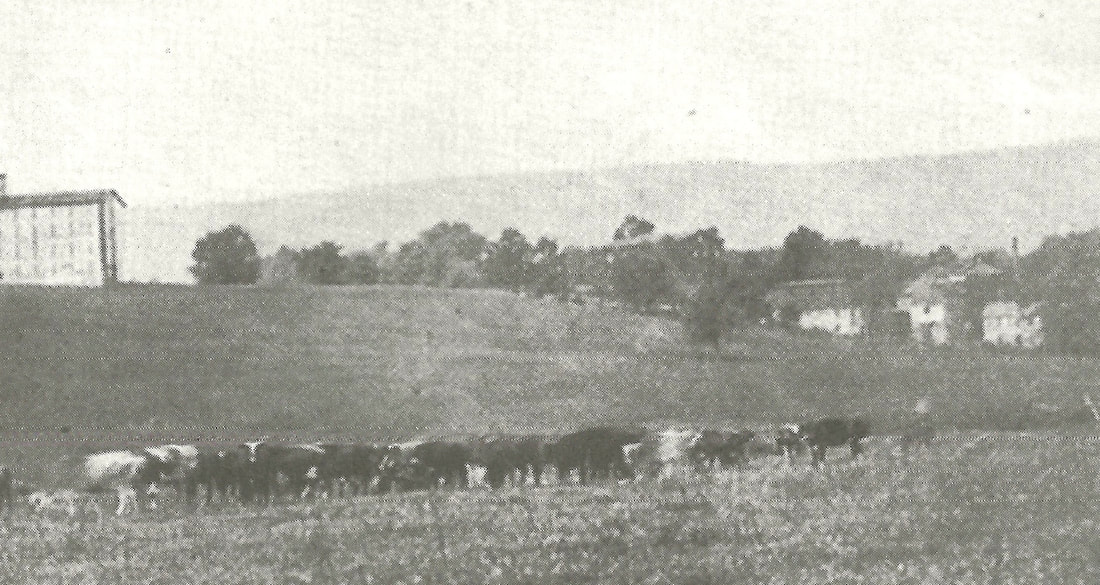 The Mountain Spring Distilling Company, better known as "Ahalt's Distillery," was one of two rye whiskey distilleries that operated in Burkittsville in the late-19th and early-20th centuries (the other was Horsey Distillery). John D. Ahalt established the Mountain Spring company in 1876 and converted a former mill, located in the cluster of buildings seen at the right side of the photograph, to house the distilling equipment. As the business grew, a five-story barrel warehouse was constructed on the hill overlooking the distillery complex, seen at the left of this photograph. Ahalt's signature whiskey was marked as "The Antietam" and was sold in markets throughout the east coast. From the museum collection. 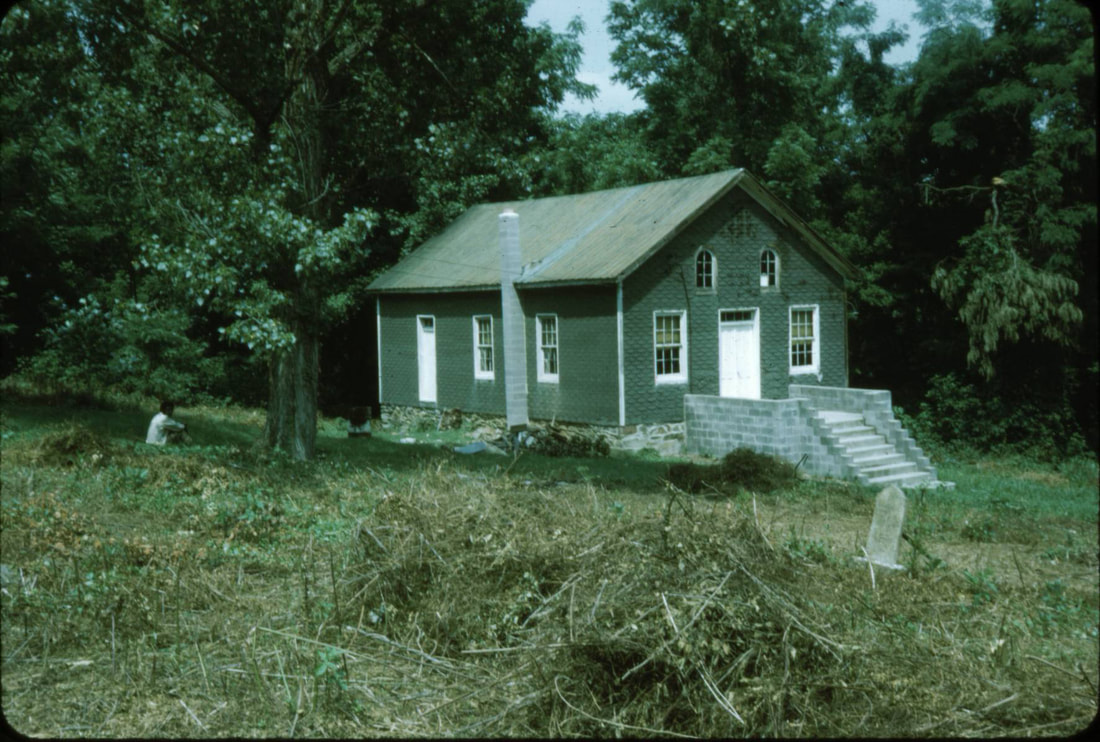 Ceres Bethel African Methodist Episcopal Church is captured on a summer afternoon in 1975. The frame church, located by the side of Gapland Road as it climbs out of town up to Crampton's Gap, was built in 1870 on the site of an earlier church and schoolhouse which served the small African American settlement that existed along the mountain side. Ceres Bethel Church was founded by Rev. Thomas Henry, a prolific circuit riding preacher of the AME Church who visited the Middletown Valley in the 1850s, organizing congregations in Middletown, Knoxville, Petersville, and Brunswick, in addition to Burkittsville. Since the church's closure in the late-1980s, Ceres Bethel Church has suffered from vandalism and neglect. From the museum collection​.
These photographs from a wedding in 1984 capture Ceres Bethel African Methodist Episcopal Church in its final years before the congregation disbanded. Visible features of the church's interior include an intricately-carved chancel rail and two lamp stands on the pulpit dias. From the museum collection​. 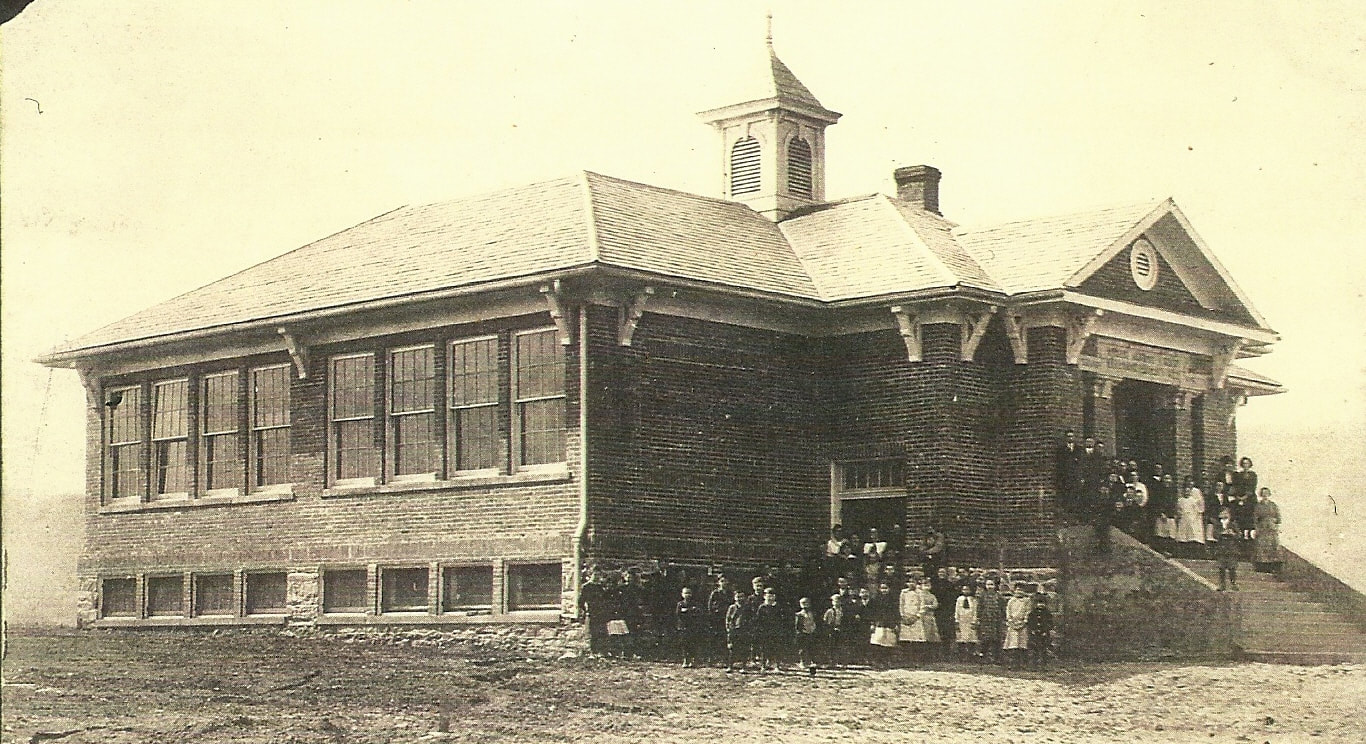 In 1914, after years of campaigning by town residents, a new school was built in Burkittsville. The brick structure housed three classrooms and a auditorium on the main floor (the latter was eventually converted to a cafeteria). Below, two gymnasiums were built, one for girls and the other for boys. The building as seen in this photograph only existed for four years. A fire gutted the still-new school in 1918, leaving just the brick walls standing. From the museum collection​. 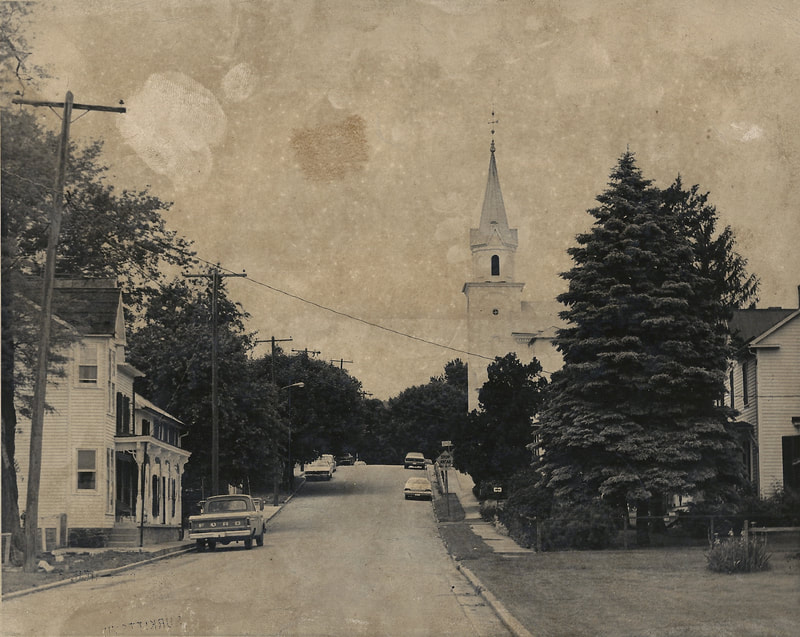 Main Street ascends the hill towards the town square in this 1970s photograph. The house on the left is the Dr. Tilghman Biser House. Across the street, the Dr. John E. Garrott house is visible behind the pine tree. The steeple of St. Paul's Lutheran Church rises near the center of the photograph. From the museum collection​.